The interpretation booklet for 'Hryre' can be downloaded here (PDF file). It includes information about the artwork, images, and details of all the medieval texts included in the projections. You can also read more about the artwork on this page. 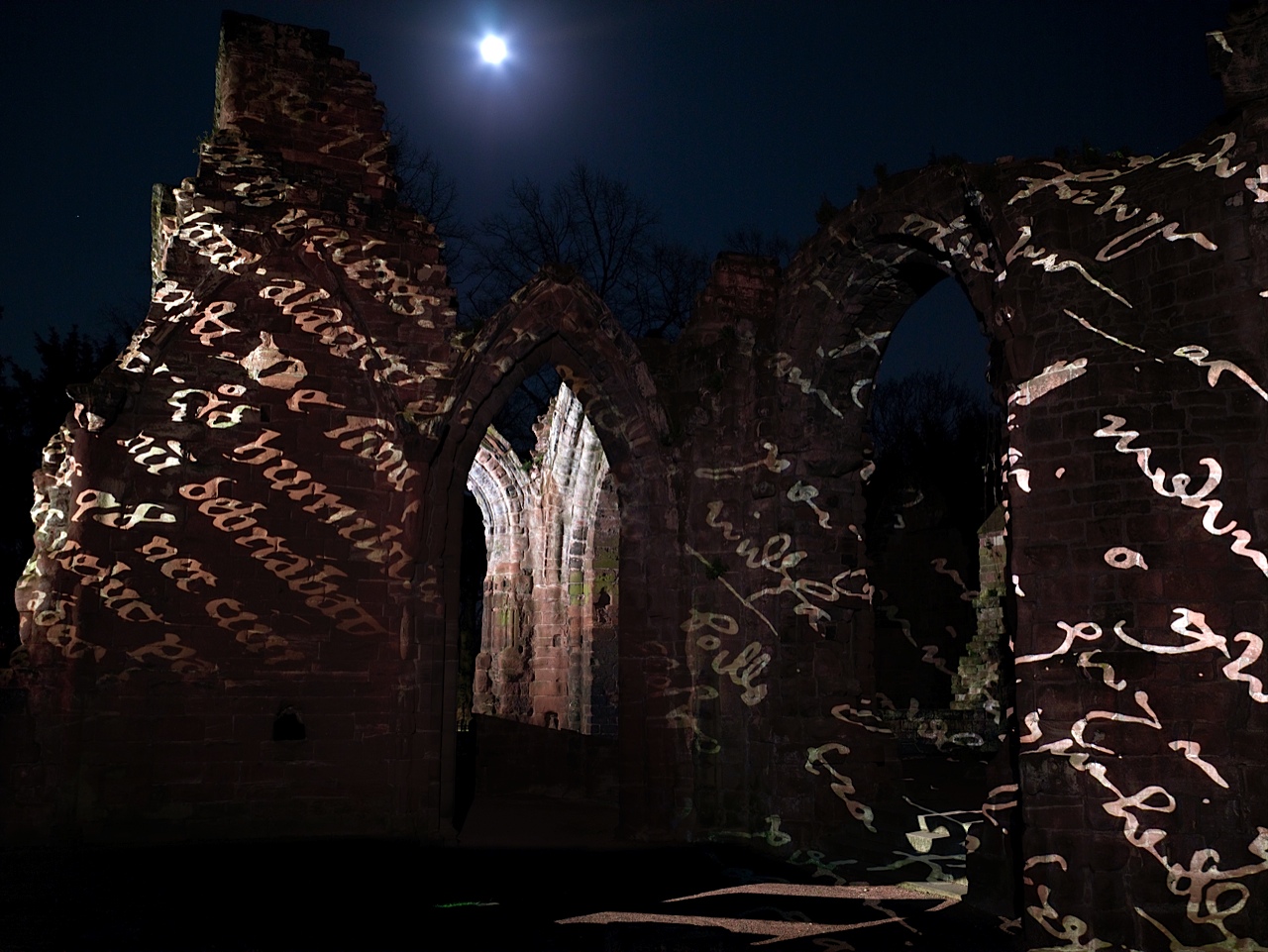 The projections across the ruins at St John’s are formed from fragments of medieval texts which describe the city of Chester in English, Latin and Welsh. Medieval Chester was a multi-cultural city with a rich multi-lingual tradition which these texts reflect. As the words are projected across the uneven, fractured stonework, they take on new shapes and abstract visual forms. Some letters and words remain legible and are designed to open up ideas and themes for reflection. The artwork asks viewers to contemplate subjects such as ruin and memory, decay and survival, the passing of time and the idea of a spiritual, peaceful place. The illumination is created by combining light and projected text from different positions around the ruins. A remote computer controls which lights are on at any moment. This means that the artwork gently changes from hour to hour and night to night revealing the different qualities of the ruins and highlighting the texts. Sometimes the work is a bold illumination and at others there is a more subtle play of light and shadow.

Some of the projected texts make direct reference to memory and loss. However, themes of renewal and rebirth are also prominent in the selected fragments. The permanent artwork makes stronger biblical references whilst maintaining its poetic references to ideas of time and tide. The experience of the illumination is akin to a form of remembering in light. Like a palimpsest, the texts appear as a form of writing rather than projection. Finally, the artwork is underpinned by the idea of light as a form of solace, consolation and liberation. 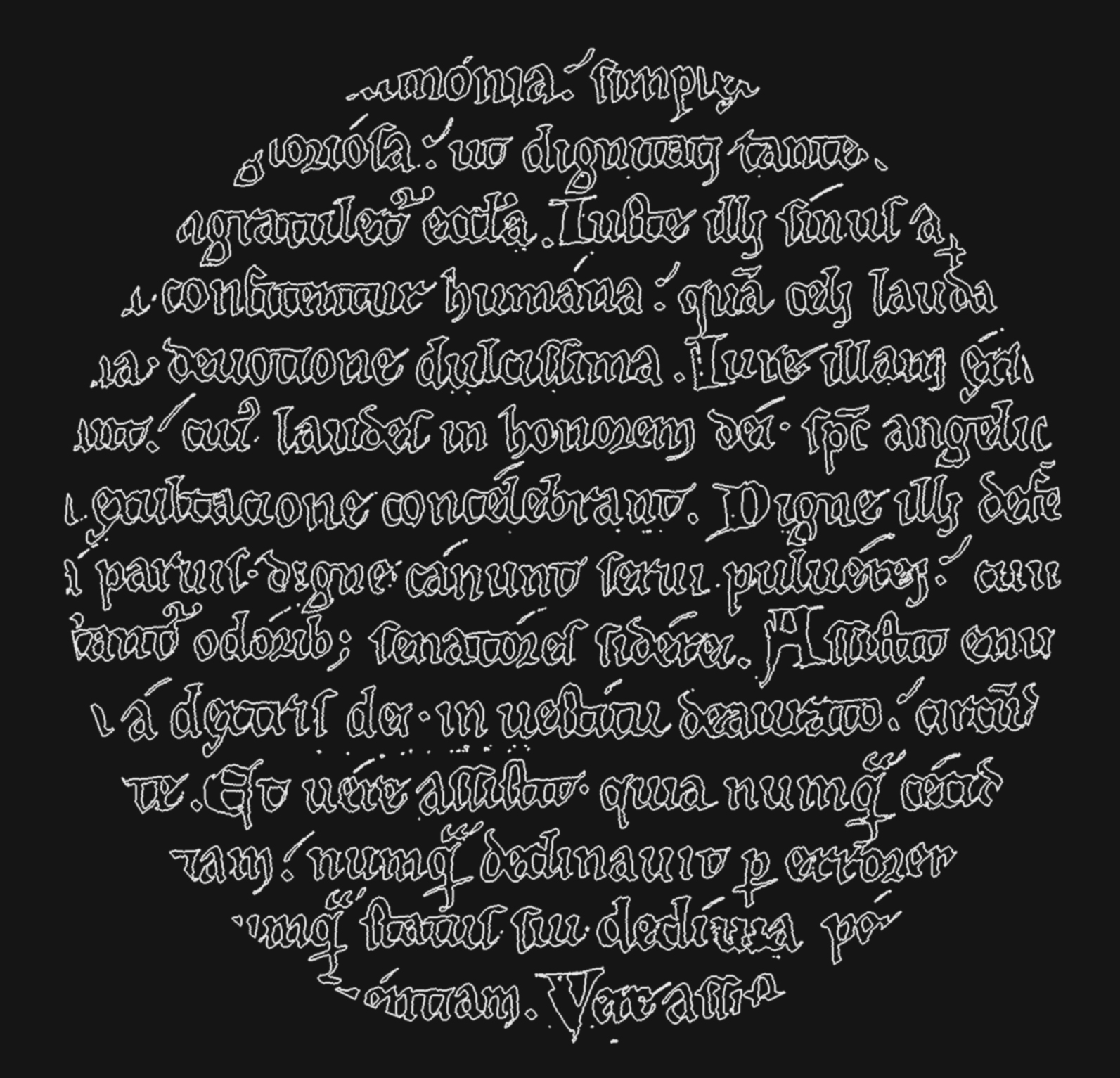 The slides and lights

The installation is formed of sixteen led projector systems mounted on specially modified poles. Four of the lights are used to model the ruins. These lights create the dynamism of light and darkness that the artwork depends on. The remaining twelve lights form the basis through which the texts are projected across the ruins. To create the images, specially fabricated glass slides are focussed on the architectural fragments using cinema lenses. The slides take two forms. The first are a series of tracings from the original manuscripts. The second group contain key words or phrases that have been extracted from the manuscripts and made into images using a serifed font. Thus the artwork reveals the source and the fragment of text.

The program uses Easter as its harmonic fulcrum. This relates to Nayan’s ongoing interest in Bede’s scientific observations of tide cycles and his important work in ecclesiastical calendars. This is exemplified in Maredudd ap Rhys’s poem referring to the rood arriving on a tide, ‘Llanw a’i dug dduw Llun i dir’ (a tide brought it on a Monday to the land).

Each slide is an image no larger than fifty millimeters in diameter. The brightness of the resulting illumination is a factor of its size on the ruins. The control system selectively brightens and dims each fitting according to a program.

The projection system was designed by Nayan Kulkarni and Scottish engineer Duncan Turner (Carbon Lighting). The electronics that precisely optimise the system’s dimming and power use were only possible because of the generous contribution of computer scientist and electronics fanatic Jamie Craig. Each light consumes no more than 90 watts and has an anticipated service life in this installation that exceeds 20 years. The electronics and precision metalwork were all manufactured in the UK and the systems were hand assembled by Nayan and Duncan. The build quality and material choices mean that they are capable of being reconditioned as lamp technology changes or completely recycled.

(Catherine and Nayan at the artwork launch)